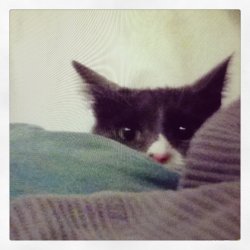 “Bean left us September 23, 2013. We adopted Bean from the Oregon Humane Society when she was a baby. We chose the kitty who at the time was named “Crime Fighter”:) because of her playful, spunky and investigative nature. Bean was also our “Queen Bean” because she often received whatever she wanted and could do no wrong. We simply stated that she “ruled the roost”. I am most happy that she spent the last year of her life being able to explore and chase birds on my large patio. She had a great life and will be missed!”