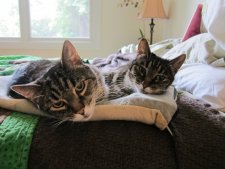 “Linus and his brother Eddie were found as kittens, eyes still closed, abandoned in a warehouse in San Jose, CA. I took them home at 3 months, and they were “my boys” for the next 15+ years. Twins in appearance but completely different in personality, Linus was smaller and also sweet and shy. He liked to sleep under the blankets, drink out of “people” glasses, and curl up in your lap any chance he got. He was always a climber, scaling his cat tree like a monkey rather than jumping like “other” cats. He joins his brother who passed in September, 2013 and hopefully they’re curled up together somewhere just like they used to be so much of the time.”