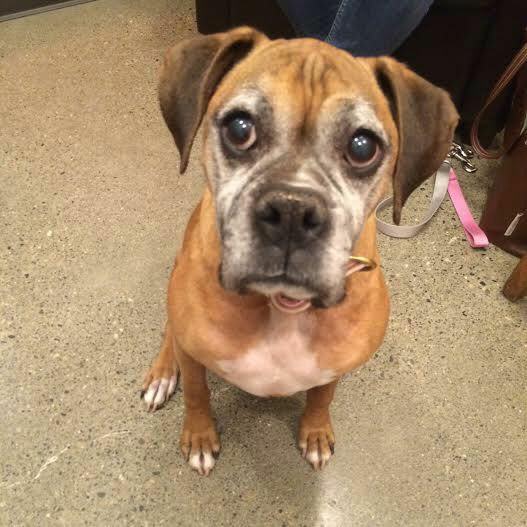 “She came into our lives as a six month old Boxer pup that needed a home and she was adorable. Six months old, a whopping 30lbs of tiny Boxer goodness. She has always had impeccable manners and came to us fully house trained, like an insta-dog. She fit in well with the pack and really cemented my love of Boxers. Those awful Boxer habits that the breed frequently has that you either love or hate? You know the ones I’m talking about – the energy of a perpetual toddler, the unexpected gut punts, the general bounciness…well, Minnie was always more on the dignified side so she was good at ‘converting’ people to the Boxer side.

Of course, Minnie was a grand dame, like her name sake, Minerva McGonagall. This poster was used for a charity cabaret show benefiting some orphaned bear cubs and this is by our good friend, MTP Studios. Over $6,000 was raised by this show! Always one to extend an altruistic paw, Minnie also appeared in a benefit calendar. Sure, sure…..it was supposed to be a Pit Bull calendar but she was an honorary Pit Bull just by association.

In September of 2015 Minnie was diagnosed with large cell lymphoma. We started chemotherapy and she was never sick a day, she really sailed through the treatments like a champ. Minnie let us know when it was time to say good-bye. With lots of tears, and a couple of cheeseburgers we ushered our girl from this life to the next. I hope everybody has the joy of  sharing their life with a special dog like Minnie.”