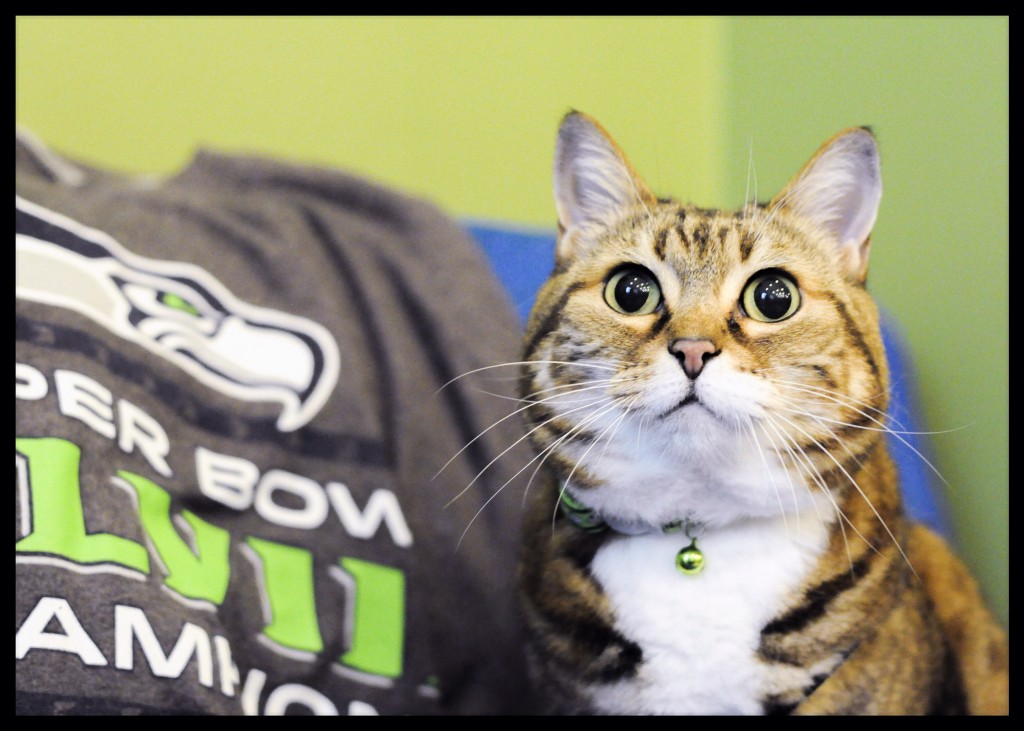 The Seahawks 12th Man has conquered records for the loudest crowd cheers at any sporting event and have registered as seismic activity, but we’ve got something to learn from the portion of the 12th Man that is made up of pets.

Since last Sunday, the city of Seattle has become quiet. Quiet, except for the excitement you can still see from the fans with fur and qualities responsible for transforming our relationship from owner and pet, to family.

Prior to the Super Bowl, when people were finished with their pet’s care at Jet City Animal Clinic, they would unexpectedly say with excitement in their voice, “Go Hawks” instead of the routine goodbye-type phrases. The excitement in Seattle was everywhere and filled the inside of our veterinary clinic on Capitol Hill.

Outside the veterinary clinic, people were interacting with others more than usual. When walking out on the sidewalks, acquaintances would be made rather than people passing each other without so much as a head nod.

One of our Veterinary Assistants at Jet City experienced an unexpected conversation with someone passing by in his car. She was walking her cat around the block on her lunch break when a convertible decked out in Seahawks gear stopped before pulling out of a driveway. The gentleman driving, dressed in an equal amount of Seahawks gear, started a brief friendly conversation, then also parted ways with the excited phrase, “Go Hawks”.

Then came the silence. After SuperBowl Sunday, the dark sky weighed heavy across disappointed fans. The conversations following the game were short. The question, “Did you watch the game?” seemed difficult for many fans to bring up. If it was brought up, it was either followed by the sore response, “Ugh, yes, and you?” or “No, but I heard about it, and although I don’t follow football — ouch”. After the exchange of single-sentence conversations, subjects would change and people would move on about their daily agenda.

The excitable energy did not dissipate completely though. During the week following, Dr. Anderson received a photo of two happy dog fans. Not long after, another photo from a client followed. The photos sent from clients of pets shortly after losing the last game of the season, demonstrates that these fur-covered fans have something to teach us, even if they were unaware of their virtuous qualities. 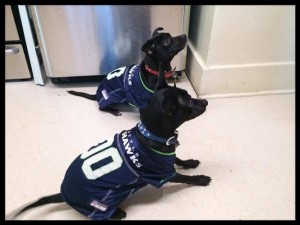 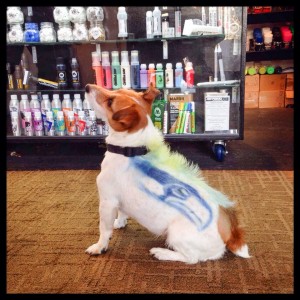 Our pets are eager to greet us with sloppy kisses on the face or purring and biscuit-making on our laps, despite our coming home from a blunder-filled day at work. They are blind to our shame-ridden experiences. Our furry family members remaining excited to flaunt their Seahawks colors off-season, year-round, 24/7, and win or lose is a symbol of their support given when it’s needed the most. They are nonjudgmental and unconditionally loving (or close to it — they do require petting and feeding punctuality).The Seahawks may be getting “smack talk” by fans of “Dynasty Teams”, but Seattle has something to be more proud of than trophies. Seattle has success that soars higher than any scoreboard can register. They have The 12th Man and the furry portion of that player, is keeping the strength and power alive with their green and blue spirit. They have the courage to keep wagging their tails and keep purring loud and clear.

Seattle is undefeated whether they win or lose. Now is not the time to put away your blue and green, it is the time to follow the lead of #The12thPet. 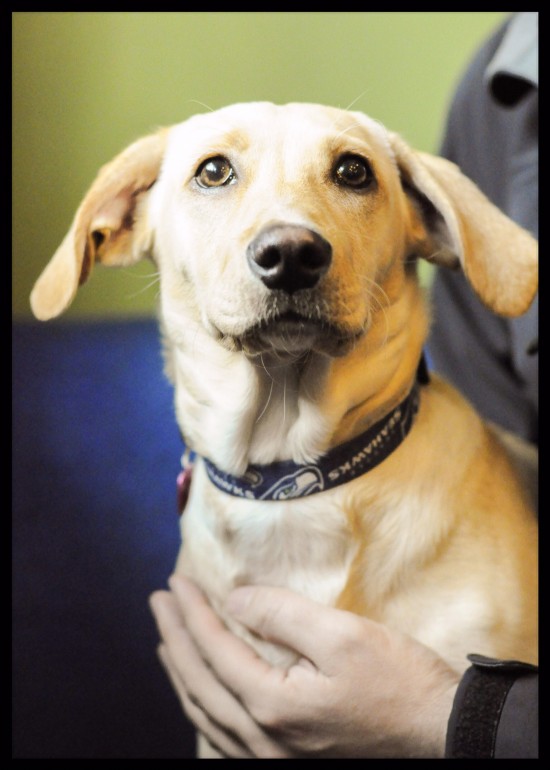 Keep the spirit going and share your pet’s photo by sending it to info@jetcityanimalclinic.com with “The 12th Pet” written in the subject line, or add the hashtag #The12thPet to your photo on Facebook or Twitter.

One Response to “Success Soaring Higher Than the Scoreboard”