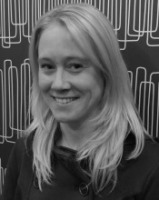 
Brooklyn is one of our Client Services Coordinators. With a variety of skill-sets under her belt, she frequently assists the medical team as well.  She joined our team in December of 2014 with more than 8 years of experience in the veterinary field. This experience includes six years at another small animal, general practice hospital in Seattle so she’s eager to build on our client relationships here alongside the Jet City team.

She has a huge passion for helping people and their pets. Brooklyn enjoys bonding with people through their animals as well as working in an emotional atmosphere. She also really appreciates the intellectual stimulation of the medical field. Her areas of interest include feline medicine, and as such, can frequently be found taking selfies with a feline friend!

Brooklyn has spent a number of years abroad, living and traveling in Southeast Asia. Most of her time was spent in Thailand, but her travels also included Borneo with the Orangutans which nearly prompted her to work with primates!  Outside of work, she enjoys traveling, running, reading and pet-sitting. If you are in need of a pet sitter, look no further! Brooklyn shares her home with her two rescue kitties, Sua and Judah!